How do you plan curriculum based on observation and documentation when you run drop-in programs?  That is a question that our OEYC constantly revisits.  We do have our regulars, but with 18 drop-ins per week in 6 locations, the only consistency is change.
The other day I was talking with a couple of staff and we were trying to come up with a great idea for our resource area at our main site.  The space is large, but our clients tend to see it as a grown-up space, thanks to the bookshelves around the perimeter.  I threw out the idea of turning it into a winter wonderland, complete with a white sheet for snow (the area is carpeted so no slipping), and boxes painted white to build forts and snowmen. 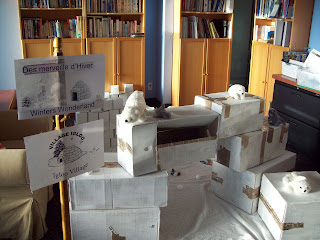 Now I like to challenge my staff with ideas like “no crafts planned for 3 months-just art” so my staff like to challenge me right back when they can.  Once I proposed this idea, one person smiled wryly and asked “Why would you pick winter wonderland?  Don’t you think that sounds like a theme?”
She was right in the sense that I did not base this idea on my observations and documentation of the children in the drop-in.  Rather, I based it on a presentation recently made at my agency by a Program Effectiveness Data Analysis Coordinator (PEDAC) and patterns of attendance at our drop-ins over the years.  Knowing that the community we serve has:
·         a higher than average population of New Canadians (many of whom come from climates warmer than Canada);
·          a higher than average population of people living in apartments;
·         children who score lower on physical health and well being (mostly in the category of gross motor skills) on the EDI; and
·         families who venture out less frequently as soon as the weather gets cold
I think it is programming based on observation and documentation.  The only difference is that this is a more global approach.
Having a winter wonderland allows the children to use gross motor skills during play and hopefully they will transfer the indoor play to outdoor play once the freezing ran ends and the snow starts to accumulate!
As an OEYC with parents in attendance who play alongside with their children, I also have an ulterior motive and that is for the parents to see how fun it can be to take the kids outside and let them play in the snow.  For families living in apartments, playing outside is very important to help their children develop those gross motor skills and to promote overall physical health and well being. 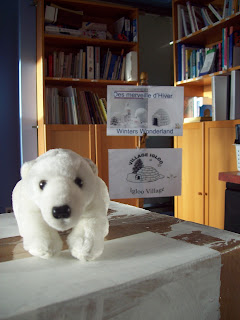 How has the winter wonderland been received?  Well, we knew the children would love it, but we didn’t anticipate the parents becoming so involved in the play with their children.  We even had one mom on her cell phone calling her friend to come quick to the playroom because they were having a snowball fight.  We swear no one has poke out an eyeball… yet!
So when faced with the challenge of how to observe and document in an OEYC/PFLC, all I can say is that sometimes you just have to think globally and act locally! 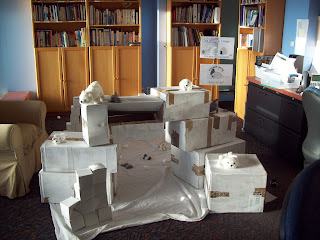