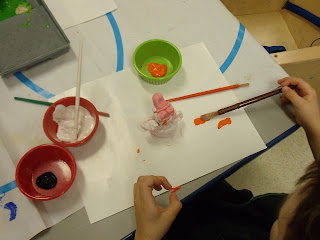 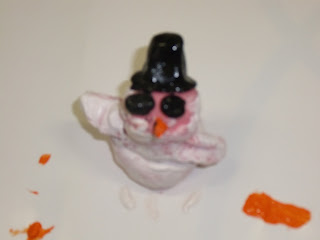 When making a snowman at the play dough table, this 4 year old boy expresses that snowmen are not pink. He verbalizes that he would like to make his snowman white. His mother asks him how he would go about doing that. He pauses to think about it and replies that he could use white paint. Together, we find some white paint and a few paint brushes. After he paints the snowman white, he realizes that the nose and top hat are not the colours he wants them to be. Again, together we collect the paint colours that he would like to apply. He notices that the carrot nose is much smaller than the snowman's body and searches for a smaller brush. The nose fell off several times, but he perservered, with his mother's help and they discovered a way to attach it. The child was very proud of his accomplishment and inspired another child to make his own snowman. He even shared his strategy for keeping the carrot nose on.The mother was pleasantly surprised with the focus and determination he used during the activity.